Did you know that there are more than 1,500 Crime Stoppers programs operating throughout the world? A major crime is solved every 14 minutes as the result of tips provided to Crime Stoppers. Learn more about the history of Crime Stoppers of Puget Sound and the global organization below.

Since launching, Crime Stoppers of Puget Sound has paid close to $1 million in tipster rewards. Those tips led to the arrest of more than 14,000 criminals and cleared over 13,000 felony cases. And we support more than 60 agencies in five counties—see the full list! 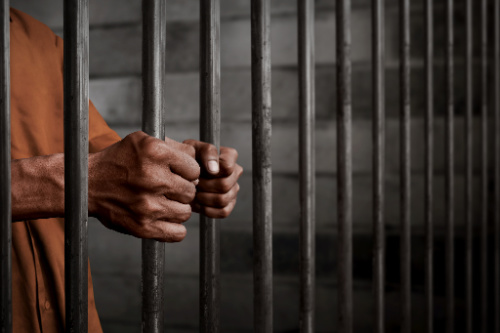 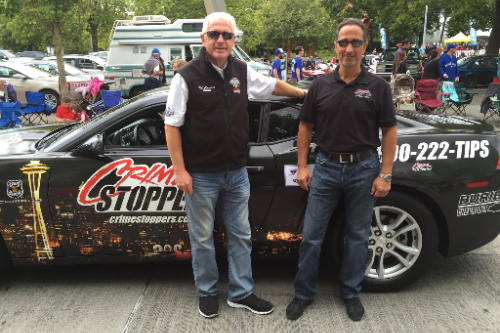 Myrle Carner (left) and James Fuda, both Directors of Crime Stoppers of Puget Sound, in July 2015.

The History of Crime Stoppers

When a young college student, Michael Carmen, was shot to death during a robbery at an Albuquerque, NM, gas station in July 1976, Detective Greg MacAleese had no idea who was responsible for the killing. No witnesses came forward, and it appeared that the senseless and brutal shotgun slaying would remain a mystery.

MacAleese, who worked for a newspaper before joining the Albuquerque Police Department, knew that something innovative would be necessary to encourage the public to get involved and help solve the murder. He conceived the idea of producing a video re-enactment of the homicide, guaranteed anonymity for anyone who was willing to call him with information, and put up a reward from his own pocket to encourage someone to provide a lead that would help identify those responsible for the murder of Carmen.

It seemed almost unnecessary to take such extraordinary steps to solve the killing of Carmen. It was a case that should have outraged the community and brought forth many witnesses. Carmen was only two weeks away from getting married and had taken an extra shift at the gas station to give a co-worker the night off. When police responded to the emergency call, they found Carmen gravely wounded—he’d been shot in the abdomen at point blank range with a 12-gauge shotgun.

The medical staff kept him alive for four hours and during that time he tried to tell detectives who was responsible, but he just didn’t have the strength to form the words. At that time, Albuquerque had one of the highest per capita crime rates in the country, and people were afraid to help the police.

MacAleese’s plan to identify those responsible for killing Carmen worked. Within a few hours after the re-creation of the murder was broadcast on television station KOAT, the detective received a phone call. The video image had triggered the memory of a person who’d heard a loud bang in the vicinity of the gas station and then saw a car driving off. The caller told MacAleese that the vehicle belonged to a resident in a nearby apartment complex. Through investigation, MacAleese and a team of detectives arrested two men within 72 hours and charged them with the murder of Carmen and a string of armed robberies.

MacAleese received other calls following the reenactment, including one that allowed police to solve the rape of a young woman. Realizing that this type of program might be useful in fighting crime, MacAleese convinced the Albuquerque Police Department to allow a group of citizens to establish the first Crime Stoppers program. For his efforts, Detective MacAleese was named the 1977 Police Officer of the Year by the International Association of Chiefs of Police. And since adopting the Crime Stoppers program, Albuquerque’s crime rate dropped significantly and is no longer ranked in the list of 20 cities with the highest per capita crime rate. 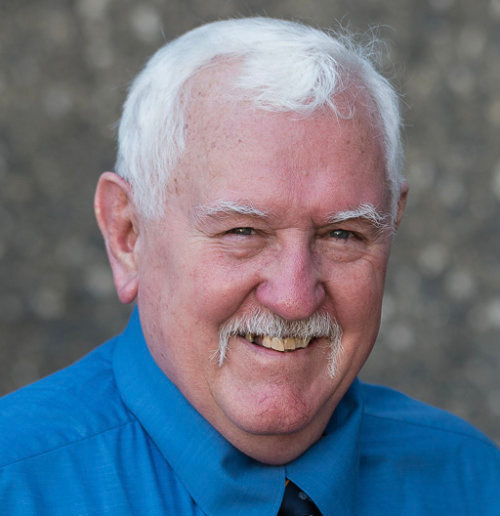 Greg MacAleese, now 71, is the founder of Crime Stoppers.

Crime Stoppers of Puget Sound encourages members of the community to assist local law enforcement agencies in the fight against crime in King, Snohomish, Kitsap, Island, and Whatcom counties. Community members submit anonymous tips by using the P3Tips mobile phone app, right here on our website, or by calling 1-800-222-TIPS (8477). Tipsters receive up to $1,000 for information leading to an arrest and charges. Our pool of money to supply tipster rewards is driven entirely by donations. Learn more about our program, and make a donation today!

I had this Shadow box made for him and surprised him with it today. Now, he just has to find a place to hang it!

Myrle is a class act who has been a personal mentor, voice for victims and tremendous crime fighter for the Seattle Police Department.

This weekend's show airs Friday night at 11 pm on Q13 FOX and Saturday night at 9:30 pm on JOEtv as well as statewide at 10:30 pm Saturday on FOX tv stations in Seattle, Spokane, Tri-Cities and Yakima.

I wrote a special tribute for him with a look back at his career and how he got his start by producing Manhunt Live! in 1988 to try to identify the Green River killer. He was working in Major Crimes at SPD until Chief Patrick Fitzsimons asked him to do something innovated.

You will love seeing the clips from the show hosted by then television superstar Patrick Duffy. It was Myrle's first time on live TV and he nailed it!

Myrle, thank you for all you have done for WMW, Crime Stoppers and the community.

Congratulations to our own Myrle Carner on his retirement after almost 33 years at Crime Stoppers of Puget Sound. Thank you!

And here’s the top cases on Washington's Most Wanted with David Rose Q13 Fox News. Which of these can you help detectives solve?

• NEED ID: Des Moines, WA Police Department need your help to identify a pack of violent criminals who teamed up to beat a scuba diving instructor last Saturday at 6 AM at Redondo Beach. 12 individuals ganged up on the victim beating and robbing him. Suspects took off in four separate vehicles. Can you identify any of the individuals or their vehicles?

• WANTED: Pot shop burglars! Who are these 3 robbers that stormed a marijuana shop in Silverdale? They took over $1000 in merchandise from the store. Kitsap County Sheriff's Office is hoping you can help identify these criminals.

• NEED ID: Can you help Mountlake Terrace Police Department find these two criminals who robbed a man last Halloween while he was getting ready for his work day? The crime occurred behind the Bathfitter.com store on 220th Street SW and 69th Ave W. The suspects stole tools directly out of the company van in broad daylight.

• WANTED: Do you know this Chromebook thief at River Ridge High School on January 11th? Lacey Police Department needs your help to find this burglar. Remember folks: he isn’t just robbing the high school; he’s robbing the children of their necessary materials to complete remote at-home learning. Help us catch him!

If you have any information relating to the crimes, people, or suspects in this video, please submit an anonymous tip at P3Tips.com or at crimestoppers.com or by calling 800-222-TIPS. We never ask for your name, and we offer a cash reward of up to $1,000 for any information leading to an arrest and charges.

Congratulations to our own Myrle Carner on his retirement after almost 33 years at Crime Stoppers of Puget Sound. Thank you!And here’s the top cases on Washi...
View on Facebook
·Share

Congrats, Myrle! A true leader in the law enforcement community! We wish you the best in your retirement!

A True Law Enforcement Hero- in so many ways you have changed the streets and protected us all and in the healthiest ways shared and taught so many others how to be a part of the solution.

NEED ID: Two men were caught on surveillance video after shooting a man in Kent on Christmas Day. The crime happened after they exited a Metro bus on Pacific Highway South and South 246th street at 5:42 AM. Afterward, the two men were seen going into the Midway Mobile Mansion trailer park. Detectives are hoping someone recognizes them. If you have ANY information about this crime, please submit an anonymous tip at CrimeStoppers.com or via the P3Tips app. You could receive up to $1,000 for information leading to an arrest and charges.

ANTED: Convicted felon Joshua Wadsworth, 29, is accused of kicking a woman in the stomach who was 8-½ months pregnant. Wadworth is wanted by King County Sheriff’s detectives and has several warrants out for his arrest. Can you help police take him off the streets? Detectives say he drives a black van and is probably hiding out in the South King County area, but he has also lived in Lynnwood. If you see him, call 911 and then immediately submit an anonymous tip at CrimeStoppers.com or via the P3Tips app. You could receive up to $1,000 for information leading to an arrest and charges.

#CrimeStoppers #NeedYourHelp #JoshuaWadsworth #KingCountySheriff #KingCounty #Lynnwood #assaultKing County Sheriff's deputies are asking for your help to find this convicted felon who is accused of kicking a woman in the stomach who was 8 1/2 months pregnant.

Detectives say 29-year-old Joshua Wadsworth assaulted the mother for hours as he held her hostage inside his home in SeaTac last November.

"He kept her against her will inside that home overnight, repeatedly beating her every time she attempted to leave. The next morning, now the day before Thanksgiving, she's able to flee, goes to a neighbor's home where she's able to call 911. I'm just deeply troubled that a woman would sustain this abuse overnight. We need to absolutely get him in custody," said King County Sheriff’s Sgt. Tim Meyer.

He also has a warrant for his arrest in Puyallup for theft.

Detectives say he drives a black van and is probably hiding in the south King County area.

He' has lived in Lynnwood though so keep an eye out for him in Snohomish County as well.

Crime Stoppers of Puget Sound is offering a cash reward of up to $1,000 for information that leads to his arrest.

If you know where he is, you will remain anonymous when you submit the information through the P3 Tips app on your smart phone that you can download for free. Or, you can call the Crime Stoppers hot line at 1-800-222-TIPS (8477).

NEED ID: Kent Police are asking for your help to identify this suspect, who shot a 21-year-old man on December 11. The victim was shopping inside Star Vape smoke shop located at 10422 SE Kent Kangley Rd. The suspect arrived in a grayish-blue Acura TL with a second accomplice who remained in the vehicle. The victim was taken to Harborview Medical Center and treated for a life-threatening gunshot wound and survived. If you can identify the suspect, please submit an anonymous tip at CrimeStoppers.com or via the P3Tips app. You could receive up to $1,000 for information leading to an arrest and charges.

Any cookies that may not be particularly necessary for the website to function and is used specifically to collect user personal data via analytics, ads, other embedded contents are termed as non-necessary cookies. It is mandatory to procure user consent prior to running these cookies on your website.